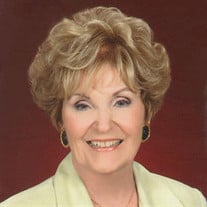 Barbara Ellen Hoke Lawson passed away peacefully in her home on Friday, December 3, 2021, with her youngest son, her beloved caregiver, and a host of angels at her side. Barbara was born April 17th, 1930, to her parents, Dr. Leonard Iverson Hoke and Lucille Woodson Hoke in Princeton, West Virginia. Barbara is a West Virginia native and lived in several coal mining communities with her family as her father started his medical practice. They settled in Nitro, West Virginia, in the late 1930s. Barbara attended school in Nitro and graduated from Nitro High School as valedictorian. She graduated from West Virginia University with highest honors and was the first female student body president at WVU. She met her future husband Max during their senior year at WVU. Max and Barbara were married in 1951. After Max’s second tour of duty in the Navy, they settled in Princeton, West Virginia where Max started his first civilian job. Barbara became a schoolteacher which began a lifelong passion for teaching and education. Their two sons, Max Wendell Lawson Jr., and Leonard Blaine Lawson were born while they lived in West Virginia. After the boys were born, Barbara was a stay-at-home mom until she resumed teaching in 1963. She initially taught elementary school where she touched many lives, was beloved by students, and respected by colleagues. Barbara was then recruited to become one of the first educational television teachers in the state. She developed her own programming which was broadcast throughout West Virginia and won many accolades. Max and Barbara then made the decision to move to Greeneville, Tennessee where Max became a Chevrolet dealer. After moving to Tennessee, Barbara was again a pioneer in the development, programming, and recording of education programs with WSJK TV and East Tennessee State University. Her world geography show, “Banana Boats to Bangkok”, was successful and popular in schools throughout Tennessee. Barbara was always known as a leader. She was a tireless advocate, volunteer, and worked for multiple organizations in Greeneville and Greene County. She worked with both educational organizations and multiple businesses throughout the region. She was a founder of the “Leadership Greene County” program and the “Youth Leadership of Greene County” program for high school students. She and Max met yearly with every leadership class until their retirement from the programs that she had initiated and maintained for many years. Barbara founded Lawson/Weemes Training and Marketing with her beloved friend and partner Betty Weemes. They worked with major corporations, regional banks, grocery store chains, and toll road authorities across the United States, with the goal of improving customer service. She also did consulting work for Port and Toll Road Authorities in Australia. In addition, she consulted with Eastman Chemical Company to train foreign-born employees coming to work in the United States by educating them in American customs, traditions, and business etiquette. She was devoted to her beloved Asbury United Methodist Church and the church family. She sang in the church choir for over 45 years and presented the children’s sermon, “Moments with the Children”, every Sunday for nearly 30 years. She was preceded in death by her beloved husband, Max Wendell Lawson Sr. in 2015 after 64 years of marriage, her parents, Leonard Iverson Hoke and Lucille Woodson Hoke, and her youngest sister Mary “Mitzi” Hoke Stone. She also lost her precious grandson Blaine Lawson in 2011. Barbara leaves a living legacy of two sons, Dr. Wendell Lawson, Jr. (Anne), and Leonard “Lennie” Lawson (Terri), and her sister Frances Hoke Jeranko. Her grandchildren include Katie Wilson (Todd), Abby Lawson, Max Lawson III (Jennifer), Fern Pruss (Matthew), Audra Nelson (Ben), and Gwen Gulmire (Connor) along with 15 great-grandchildren. Barbara got to know and love every one of them. Barbara and Max were partners…in love, life, faith, and business. She leaves a legacy of love, faith, sacrificial service, and pride in her family and friends. A public service of celebration will be held at Asbury United Methodist Church, 201 South Main Street in Greeneville at 11:00 am on Wednesday, December 8th. Barbara will be laid to rest between her husband Max and her first grandchild Blaine at GreeneLawn Memory Gardens at a private family service.

Barbara Ellen Hoke Lawson passed away peacefully in her home on Friday, December 3, 2021, with her youngest son, her beloved caregiver, and a host of angels at her side. Barbara was born April 17th, 1930, to her parents, Dr. Leonard Iverson... View Obituary & Service Information

Barbara Ellen Hoke Lawson passed away peacefully in her home...