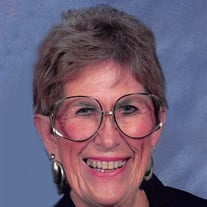 Obituary Betty Carter Justis, age 91, passed away Monday at Morning Pointe of Greeneville. She was a daughter of the late Pern and Dollie Nelms Carter. Betty was a graduate of Mosheim High School and attended East Tennessee State University. Betty began her career in the Greene County Circuit Court Clerk’s office in 1964 as a deputy clerk. In 1978, she was elected Circuit Court Clerk, a position she held until her retirement in 1994. For decades Betty was a widely-known political figure, she was an active member of the Greene County Republican Party and the Greene County Republican Women’s Club. After her retirement, Mrs. Justis volunteered at Laughlin Memorial Hospital and remained active in the political arena. She was also a member of the Order of the Eastern Star, Mosheim Ruritan Club, the Nolachuckey Chapter of Daughters of the American Revolution, and several other community organizations. She received the Robert C. Austin Distinguished Service to Community Award in 2010 and was the recipient of the Statesman of the Year Award for the First Congressional District. She was an active member of Asbury United Methodist Church and attended faithfully until February of this year. She leaves behind her husband of 69 years, Kermit Justis; a special niece, who was more like a sister, Pat Logan. Betty was the mother of two children, JoKema and Bland. JoKema’s family includes: Joe (Amanda) Ayers and their child, Avery, and Kerria Emery and daughter, Kemra. Bland and his wife, Debbie, and their family includes: Angel (Andy) Jones, Little Andy, Amber Justis, Samuel Justis, Jacob Justis, and Tony Greer. Betty’s family also includes several nieces and nephews, “The Cousins”, and special friends: Sally and Wayne Bayless and family. In addition to her parents, she was preceded in death by her daughter, JoKema, who died in an accident in 1996; two sisters: Anne Justis and Pauline Logan; an infant brother; and a special nephew: Clark Justis. The family will receive friends from 4 – 6 p.m. Wednesday at Doughty-Stevens Funeral Home. Funeral services will follow the visitation at 6 o’clock in the funeral home chapel with the Rev. Jerry Jones officiating. Family and friends are asked to meet at Doughty-Stevens at 10 a.m. Thursday to go in procession to Carter’s Chapel Cemetery for the 11 a.m. committal service. Pallbearers will be Samuel Justis, Jacob Justis, Eric Justis, Bill Richards, Dennis Chapman, Gary Light, and Wayne Bayless. To send flowers to the family or plant a tree in memory of Betty Carter Justis, please visit our floral store.

Obituary Betty Carter Justis, age 91, passed away Monday at Morning Pointe of Greeneville. She was a daughter of the late Pern and Dollie Nelms Carter. Betty was a graduate of Mosheim High School and attended East Tennessee State University.... View Obituary & Service Information

The family of Betty Carter Justis created this Life Tributes page to make it easy to share your memories.

Send flowers to the Justis family.