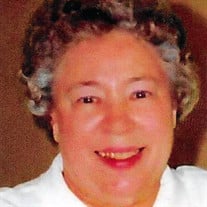 [To View LiveStream of the Service Click Here] https://view.oneroomstreaming.com/authorise.php?k=1651255774181329 Bobbie Elizabeth Waddell, age 92, of the 107 Cutoff, died Wednesday evening at her home after an extended illness. Mrs. Waddell was the daughter of the late Sam and Ada Leonard and the widower of H.K. Waddell, who died in September of 2006. She was a member of Zion Presbyterian Church and a member of Zion Family and Community Education Club. She retired from Greeneville City Schools, having worked as a teacher assistant for many years. She was a loving and devoted wife, mother and grandmother who always saw the best in everyone. Survivors include her three children and their spouses, Steve Waddell and Pat Burr; Lisa and Bob Bennett; Mark and Sharron Waddell; her grandchildren, Josh Golden, Christen Waddell, Kathryn Waddell, Bennett Waddell; and several nieces, nephews and extended family members. In addition to her parents and husband, she was preceded in death by a brother, Thomas Leonard and a sister Charlotte Watts. Special thanks to her wonderful caregivers Adell Hensley, Delores Hensley, Debbie Cutshaw and Sharon Hartman and the nurses and CNAs at Amedisys. The family will receive friends from 1-4 pm Saturday at Doughty-Stevens Funeral Home with funeral services to follow visitation at 4:00 pm in the funeral home chapel. Josh Golden will officiate. Interment will follow in Zion Presbyterian Church Cemetery. Active pallbearers will be Bennett Waddell, Tom Leonard, Tim Leonard, Richard Adams, Ethan Adams, Thomas Adams, Harlan Jones and Nic Luttrell. Memorial contributions in honor of Mrs. Waddell may be made to the charity of the donor’s choice.

Send flowers to the Waddell family.