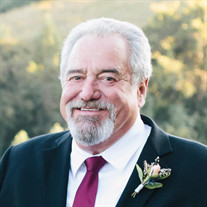 Click Here to View Livestream of Service After more than a decade of heart break from Tennessee football, he had finally had enough. Donald Ray Batson, better known as Don, Donnie Ray, Papaw, Bapi, Sunshine, and even Dapper Don, went through those pearly gates on Friday, February 12 after a brief battle with cancer and a long battle with losing records. Don was born in Charlotte, North Carolina, on May 18th, 1953, to parents, L.C. and Ruby Batson, but he was raised in Dandridge, Tennessee and was a proud East Tennessean. He was the third child of five and was fiercely protective and loyal to his family. He was married (usually joyfully) for 38 years to his wife, Lynn Harbison Batson, and nothing made him happier than being with his children and grandchildren. He was extremely proud of Josh & Missy, Matt & Kelly, Micah, and Elizabeth & Tyler, but he was downright gleeful seeing his grandchildren: Jordan, Lillyan, Kayle, Sydney, Gavin, Faeryn, Jameson, Peyton, Ellie and Charlotte. Even after ten, he joked that he was still holding hope that one day a grandkid would be named after him. Don was a true learner. He loved history, trivia, reading, and surprising you with his vault of never-ending knowledge. He went to Maury High School, served in the Army, graduated from the University of Tennessee (Go Vols!), and later received his masters from Tusculum University. As a social worker, he dedicated his life to making sure children were safe, loved, and had the chance to succeed. While he enjoyed many professional awards and accomplishments, Don’s greatest satisfaction came from hearing from adults who had succeeded in life and remembered the difference he had made for them as a child. Among others, Don worked at East Tennessee Human Resources Agency, Holston United Methodist Home for Children, Child & Family Services, Tennessee Child Abuse Prevention, and had recently retired as CEO of Oklahoma United Methodist Circle of Care. Don's children would want him remembered as a leader, a man with convictions that could lead you into battle, and the person that they most admired. Don thought at times he had lost his gift, but his kids would say that he could always make them laugh. Above all, they would say he was an honorable man with the highest integrity who did the right thing because it was the right thing to do. Don was a lifelong United Methodist and was confident that when this day came that he would be beside his Lord and Savior. Don was preceded in death by his mother, Ruby, and his baby sister, Kim, both wonderful women he is catching up with today. Left to cherish his memory are his wife, children, and grandchildren; father, LC, and his loving wife, Lois; siblings: Jeanne & Ed Thornton, Frank & Donna Batson, Bill & Kathy Batson, and many extended cousins and relatives, including his cousin Ronnie Batson whom he always considered a brother. A special thanks to Dr. Theo Hensley and Bri Broyles of Greeneville Internal Medicine for their special care, Duke Cancer Center for their excellent treatment, and Blue Ridge Physical Therapy team for their compassion. In lieu of flowers, you may honor Don with a donation to Oklahoma United Methodist Circle of Care (1501 N.W. 24th St., Suite 214, Oklahoma City, OK 73106 or www.circleofcare.org) or to any agency fighting to make children's lives better. A celebration of life will be held at Doughty-Stevens Funeral Home on Wednesday, February 17th at 3pm. Please protect our family and yours by wearing a mask and be prepared to hear a little bluegrass. This obituary was lovingly written by Don's family.

[Click Here to View Livestream of Service]https://www.oneroomstreaming.com/view/authorise.php?k=1613190946100639 After more than a decade of heart break from Tennessee football, he had finally had enough. Donald Ray Batson, better known as... View Obituary & Service Information

After more than a decade...

Send flowers to the Batson family.