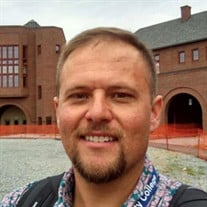 Not sure what to send?

Dustin Lynn Fincher, 36 of Greeneville, TN passed away the morning of Tuesday, June 21st, 2022 at Greeneville Community Hospital, surrounded by his mother and father, Sherry and David and family after a courageous four-year battle with cancer. Dustin, a Greeneville native, was born on February 7th, 1986. He was a passionate and caring man with a love for history as he was a professor in the History department at Walters State Community College, which was always his dream. He enjoyed the time he spent there with his students and colleagues. Dustin graduated from West Greene High School in 2004. After high school, he attended Walters State Community College, where he obtained an associate’s degree. He then moved on to East Tennessee State University, where he would earn both his Bachelors and Masters degrees. He also had an avid love for old collector cars and he enjoyed planting and caring for all types of flowers. As spoken by his cousin, Kevin Fincher, "Dustin was one of the most compassionate, selfless, and intelligent souls that I have ever known. Dustin believed that ALL people deserved to be heard and respected. He touched many lives with this philosophy. Dustin opened the hearts and minds of his students, his friends, and his family. I cannot think of a better legacy to leave behind. He was one of those earthly angels placed here to teach us all to be better people. He accomplished that merely by just being Dustin". Dustin is survived by his loving parents, Sherry and David Fincher; grandmother, Mary McCamey; aunt, Janie Fincher; uncle and aunt, Lloyd (Unc) and Kim McCamey; cousins Kevin Fincher, Mike Fincher, and Kassandra and Josh Trentham; a very special cousin, whom he thought of as a niece and adored, Mayleigh Elizabeth Trentham; many other cousins and close family members; special friend, who he grew up with, Josh Hinkle and his gifted teacher for many years, who went on to be one of his dearest friends, Shelia Hylton Jones. Dustin is preceded in death by his beloved grandfather, Lloyd Kenneth McCamey; beloved grandparents, Guy and Bonnie Fincher; and uncle, Dale Fincher. The family would like to express a very special thank you to Amedisys Home Health including special thanks to Jessica Dearinger, Jason Clark, Dennis Freshour, Kimberly Salvalaggio, and Brodie West. Also, special thanks to East Tennessee Cancer Specialist of Greeneville: Dr. Anil Tumkur, Kimberly Hoyle, FNP, and all the staff; Dr. Timothy Fullagar, Dr. Kyle Colvett, and Greeneville Eye Clinic including special thanks for Dr. Laura Urban, Leah Collins, and Shellie Gilland. The family would also like to express thanks to the teachers and staff of both Walters State Community College and East Tennessee State University, specifically the History Departments. The family will receive friends from 2 – 5 p.m. on Sunday, June 26th, at Doughty-Stevens Funeral Home. A memorial service will follow at 5 o’clock with the Rev. Richard Long and the Rev. Dr. Kenneth H. Saunders III officiating. In lieu of flowers, please make a donation in Dustin Lynn Fincher's memory to the American Cancer Society or the Greeneville Humane Society.

Dustin Lynn Fincher, 36 of Greeneville, TN passed away the morning of Tuesday, June 21st, 2022 at Greeneville Community Hospital, surrounded by his mother and father, Sherry and David and family after a courageous four-year battle with cancer.... View Obituary & Service Information

Dustin Lynn Fincher, 36 of Greeneville, TN passed away the morning...

Send flowers to the FIncher family.