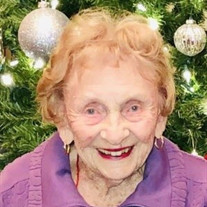 Obituary Ethel Christena Barber, 101, of Greeneville, went to be with her Lord and Savior the morning of Monday, January 4. She was the beloved mother of Christena Barber Walters, of Greeneville, and the late Albert William Barber Jr. of Owensboro, KY. She was the wife of late Albert William Barber, Sr. of Palm Desert, CA. Her loving grandchildren include Tara Walters Bolton of Jefferson City, TN, Tamara Walters Dickson of Franklin, TN and Albert William Barber III of Owensboro, KY. She was blessed to have three great grandchildren, Christena Reese Bolton, Nolen Hunt Dickson, and Natalie Elizabeth Grace Barber. A native of Philadelphia, PA, she raised two children who both migrated to universities in the south. She and her husband moved to Palm Desert, CA where they resided for over 40 years. She loved making and collecting dolls, dollhouses and miniatures, attending church and Bible study groups, traveling the world, reading, and the now lost art of writing letters to friends and family. She lived her life as a faithful servant of God, shining her light wherever she went. Those who were fortunate to know her loved her. There will be no formal memorial service, but a private burial will be held at a later date. In lieu of flowers, donations can be made to First Presbyterian Church on her behalf. Condolences may be made at https://www.doughty-stevens.com.  To send flowers to the family or plant a tree in memory of Ethel Christena Barber, please visit our floral store.

The family of Ethel Christena Barber created this Life Tributes page to make it easy to share your memories.

Send flowers to the Barber family.