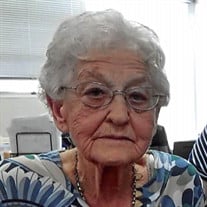 Ethel Douthat Davis, 95, of Greeneville, formerly of Mohawk, passed away Thursday morning at the Village of Allandale. She was retired secretary from West Greene High School and was the oldest member of Concord Baptist Church. Ethel enjoyed... View Obituary & Service Information

The family of Ethel Douthat Davis created this Life Tributes page to make it easy to share your memories.

Send flowers to the Davis family.