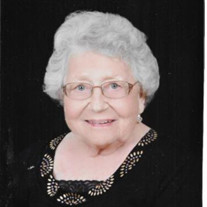 Helen Elizabeth Blue was born on March 28, 1926 in Greeneville, TN to parents William and Macy (Sentelle) Walters. Helen graduated from Doak High School in 1944. After high school, along with a few friends she moved to Washington DC and worked for the FBI. While in Washington DC, Helen met Willard (Bill) E. Blue – a Navy sailor who would become her husband in 1949. Being in the Navy they moved around, living in Orange, TX, Norfolk, VA, Great Lakes, IL, San Diego, CA, Yokohama, Japan and then Vallejo, CA. When Bill retired from the Navy in 1964, they continued to live in Vallejo. In 1991, Helen and Bill along with Helen's mother Macy Walters moved back to Greeneville, TN. During her adult life, Helen loved to bowl and she also knitted and crocheted making lots of gifts for her friends and family. She was very active in the Fleet Reserve Association (FRA) while in Vallejo and did a lot of volunteer work. Once Helen moved to Greeneville she joined the Zion FCE and the Fairview FCE clubs, becoming an active member. Helen was an avid quilter and many friends and family are lucky to have received one of her many quilts. Helen was also a member of her family's church, Greenwood United Methodist Church. She passed away April 28, 2021 at the age of 95. Helen is survived by her daughter, Debra (Bill Harnois); grandson, Marcel (Jerrica); great-grandchildren, Meghan, Seth, Allen, Olivia and Macie; daughter, Barbara (Richard Thomas); granddaughter, Beckie Barber (Jay Roach); great-granddaughters, Alexis and Brianna; grandson, Scott Thomas (Melissa); great-granddaughters, Maddy and Lily; daughter, Denise Brown; daughter, Jeanne (Bob Jensen); grandson Rory (Megan); great-granddaughter Zoe and her sister Margaret Ann Cole; along with various nieces, nephews, and cousins. A memorial service will be held on Tuesday, October 5th, at 1:00 PM at Greenwood United Methodist Church. The Rev. Rick Ballard will officiate.

Helen Elizabeth Blue was born on March 28, 1926 in Greeneville, TN to parents William and Macy (Sentelle) Walters. Helen graduated from Doak High School in 1944. After high school, along with a few friends she moved to Washington DC and worked... View Obituary & Service Information

Send flowers to the Blue family.