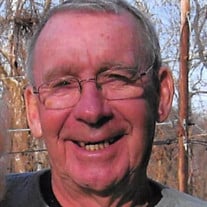 Howard Edmund Slagle, veteran, husband, father, brother, grandfather, great-grandfather, coach, Tusculum alumnus and athlete, died May 30, 2021, in Greeneville, TN from cardio-pulmonary complications. He was 81. Mr. Slagle was born on July 30, 1939 in Manhattan, NY, to Dora Guthro Slagle - who immigrated from Nova Scotia, Canada - and William Hadley Slagle of Chuckey, TN. The Slagle family moved to Long Island, NY, where Mr. Slagle’s early years were filled with adventures and experiences which were instrumental in molding his determined work ethic and entertaining personality. During his formative years, the Slagle family made regular summer trips to his father Hadley’s hometown of Chuckey, where Mr. Slagle met a young neighborhood girl, Mary Jo Solomon, who would years later become the great love of his life, wife and companion. Mr. Slagle graduated from Mineola High School, Long Island in 1957, where he was a standout lacrosse player and track star, once participating at the Oyster Bay Invitational and meeting Eleanor Roosevelt, who presented him with a medal. In 1958, Mr. Slagle attended Tusculum College, graduating with a Bachelor of Science degree in mathematics in 1961. During his tenure at Tusculum, Mr. Slagle played varsity basketball and was a member of the cross country team. He was a life-long supporter and champion of his Alma Mater, participating in many reunions, participating in the Pioneer Club, staying in contact with classmates and was honored by Tusculum as a Golden Pioneer. In 1961, Mr. Slagle joined the U.S Army where he was stationed in Germany for two years being honorably discharged in 1963. Upon his return to the states, he and Ms. Solomon were married in Bay Shore, NY, and immediately settled in Greeneville where he started work with Magnavox, eventually becoming an international purchasing agent. The Slagle family grew with three daughters where Mr. Slagle was involved in every aspect of their lives including coaching various sports teams and other activities. Mr. Slagle retired from Philips/Magnavox after a more than 30-year career, whereupon, he and Mary Jo traveled extensively domestically and abroad. He was a dedicated mentor to the Boys and Girls Club, spending countless hours, teaching young people both the game of golf and important life skills through the First Tee program. He supported the local YMCA, rarely missing a day at the facility. He was a member of Asbury United Methodist Church. He was preceded in death by his parents, Hadley and Dora Slagle. He is survived by his beloved wife of nearly 60 years Mary Jo Slagle of Greeneville, his brother Bill Slagle and his wife Lynne of Auburndale, FL, his daughters LuAnne Slagle Spurrell and husband Jim of Bethesda, MD, Suzanne Slagle Richey of Greeneville, and Laura Slagle Cain and husband Jeff of Knoxville; his grandchildren Evan Spurrell, Megan Spurrell and husband Lt. Robert Winning, USN; Lane and Emily Richey; and Madeline and Jake Cain; and his great-grandchildren Cali, Noah and Liam and their father Zack Dunbar. Honorary Pallbearers include son-in-law Jim Spurrell, son-in-law Jeff Cain, grandson Jake Cain, grandson-in-law Lt. Robert Winning, Ron Metcalfe, Eddie Humphreys, Robert Venerable, Pat Shea, and Santo Cicirello. Richard Baskette, Thomas Baskette, Terry Bellamy, Kermit Justis, Bland Justis and Wayne Grabner. The family expresses its heartfelt thanks to all of the kind and committed EMTs, nurses and doctors who give their patients comfort, care and hope. In lieu of flowers, the family requests that memorial donations be made to Tusculum University, P.O. Box 5040, Greeneville, TN 37745. A Celebration of Life service will be held at Asbury United Methodist Church on Wednesday, June 23, with visitation at 4 p.m. and service at 5 p.m. The Rev. Jerry Jones will officiate.

Send flowers to the Slagle family.