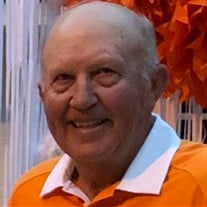 Jake Daniel “JD” Bowman JD Bowman, age 78 years, of Tusculum, passed away on April 6, 2022. He was born on March 18, 1944, to the late Charles Bewley Bowman and Annie Sluder Bowman. JD is survived by his loving wife of 58 years: Mary Frances Wilson Bowman; daughter: Leslie Bowman Robinson (Worrick) of Nashville; son: Jeff Daniel Bowman (Jacqalyn) of Franklin; grandchildren: Quint Robinson and Aubrey Robinson of Nashville, and Jake Bowman and Jillian Bowman of Franklin; brother: Haskell Bowman (Linda) of Greeneville; sister: Ann Bowman French (James) of Atlanta, GA; brother: Harold Bowman (Betty) of Maryville. JD was a proud Christian who spent his entire life in Tusculum. He was a life-time member of Shiloh Cumberland Presbyterian Church where he served in various leadership positions. JD was a graduate of Chuckey Doak HS (1962). He subsequently worked and retired from Phillips Magnavox after 43 years. While he didn’t consider it work, JD was always happy when on his treasured Bowman Farm in Tusculum. For JD and Mary Frances, spending time there with family and friends was a joy in life and one that left them with many great memories. JD was a life-long farmer and was blessed to get to stay at his home place and farm for his entire life. JD was a true sport enthusiast and spent over 20 years coaching various basketball and softball teams, winning numerous local, state, and regional championships. When he was not farming or coaching, he was supporting his beloved Tennessee Vols, ETSU Bucs, Atlanta Braves and Cleveland Indians and Browns. JD was also an avid fan and supporter of the local Greene County high schools even raising money to help them buy equipment for their programs. His children and grandkids were his greatest joy and he was so proud of everything they have accomplished in their young lives. Quint playing baseball at UT, Aubrey pursuing her legal degree at UT currently, Jake playing football at Western KY University and Jillian recently being offered a golf scholarship to MTSU. While he couldn’t attend all their games or events, he was always interested in how they did and wanted them to know how proud he was of them. The family would like to acknowledge Eddie “Buck” Dobson for being JD’s lifelong best friend who was always there. The family would also like to thank the following caregivers who were an important part of JD’s life: Angie Crawford, Beth Harris, Cindy Gosnell and Spencer Dobson. The family will receive friends on Friday, April 8th, from 5 to 7 pm at Doughty-Stevens Funeral Home, 1125 Tusculum Blvd, Greeneville, TN 37745. A service to celebrate JD’s life will be held on Saturday, April 9th at 11 am at Shiloh Cumberland Presbyterian Church, 1121 Shiloh Road, Greeneville, TN 37745 with the graveside service to follow. Pallbearers will be Chris Wilhoit, Jimmy French, Charles Lee Bowman, Quint Robinson, Jake Bowman, and Spencer Dobson. Honorary Pallbearers include all former basketball and softball players JD coached. The family ask that in lieu of flowers, that donations be made to Shiloh Church.

Send flowers to the Bowman family.