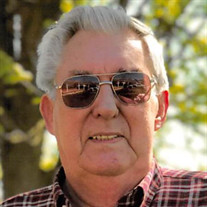 James “Jim” Rader, a well-known retired bread man, passed away on Wednesday at the Johnson City Medical Center. He was well known throughout the county affectionately as “the bread man”. Having helped his uncle, Paul Jeffers, with his route as a child, he left to serve his country in 1964 and returned in 1966. He was able to get his own route under the label Sunbeam, which was owned by Swans Bakery in Knoxville. Jim Rader is survived by his wife of 54 years: Linda Rader; a daughter and son-in-law: Jama and Beau Long; a step-son and daughter-in-law: Eric and Jan Kiker; grandchildren: Dustin Kiker, Chrysta Long, and Garrett Long all of Greeneville. He was very proud of his grandchildren. He enjoyed watching them play ball as children and to grow into young adults. Additional survivors include, sister: Lillian Rader of Concord, NC; sister and brother-in-law: Barbara and Kyle Easterly; sister-in-law: Sharon Rader. Nephews: Tim Easterly and Craig Easterly and wife, Heather; nieces: Sandra Houser and Chris of Concord, NC, and Eisha Rader of Morristown. Special friends include Tom and Cindy Springfield, Billy Barham, Gene and Sharon Jennings, Randy and Karen Baxley, BJ Cobble, Herman Presley and all other bread men he worked with through his 45-year career, along with the members of Optimist Club of Greeneville. He is preceded in death by his parents: Doyle Rader and Fonda Jeffers Rader Black; an infant brother: Jay Doyle; brother: Robert Rader; step-son: Tommy Lee Kiker; special uncles: Paul and Bruce Jeffers. The family will receive friends at Doughty-Stevens Funeral Home from 2 – 4 and 6 – 8 p.m. on Saturday. Graveside services will be held at 1:00 p.m. Sunday at GreeneLawn Memory Gardens with the Rev. Garland E. Long Jr. officiating. Family and friends are asked to meet at Doughty-Stevens at 12:15 p.m. to go in procession to the cemetery. Those attending visitation or the graveside service are asked to dress casually. Pallbearers will be Randy Baxley, Gene Jennings, Roger Carter, Elmer Tweed, Tim Easterly, and Beau Long. Special thanks to the loving and caring nursing staff of the 2400 floor ICU at the Johnson City Medical Center. In lieu of flowers, donations may be made to the donor’s choice or to a church in his memory.

James &#8220;Jim&#8221; Rader, a well-known retired bread man, passed away on Wednesday at the Johnson City Medical Center. He was well known throughout the county affectionately as &#8220;the bread man&#8221;. Having helped his uncle, Paul... View Obituary & Service Information

Send flowers to the Rader family.