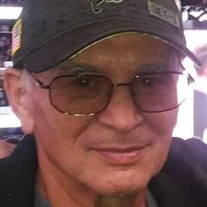 Joe Ledesma, born to Maximino and Maria Ledesma in Lansing Michigan on September 15, 1946 passed away Saturday December 11, 2021 at his home in Greeneville, TN. Joe attended Eastern High School where he met the &#8220;love of his life&#8221;,... View Obituary & Service Information

The family of Joe Ledesma created this Life Tributes page to make it easy to share your memories.

Send flowers to the Ledesma family.