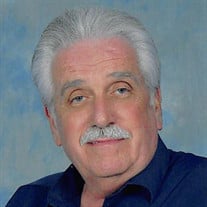 Johnny Bill Britton, age 81, of Greeneville, passed away Saturday night at his home surrounded by his family. He was a retired employee of Laughlin Memorial Hospital. He was of the Christian faith and loved his Lord and Savior Jesus Christ. He loved all of his family and taught them the ways of God. His daughters said he would always tell them “Jesus Loves You”. He touched many lives during his time here on Earth. He will be deeply missed by his family and many friends. He was a member of Union Free Will Baptist Church and attended as long as his health permitted. Survivors include his wife of 62 years, Rosemary Malone Britton, who was the love of his life; three daughters and two sons-in-law: Terry and Michael Shelton, Cindy and Chris Morrison, and Michelle Britton and her sidekick, Daryl Shelton all of Greene County; grandchildren: Jonathan and Mandy Morrison of Maryville, Erica Cooter, Mickey and Amanda Brown, Ondreea Shelton, and Breanna Shelton all of Greene County; great-grandchildren: Jackson and Benjamin Morrison of Maryville, Caleb and Tucker Brown of Greene County; two brothers and sisters-in-law: George and Diana Britton, Jim and Doris Britton all of Greene County; one brother-in-law: Michael Malone; several nieces and nephews; and his fur baby: Mimzy. He was preceded in death by his parents: Bill and Kate Britton; father-in-law and mother-in-law: Omer and Nell Malone. The family will receive friends from 5 – 8 p.m. Wednesday at Doughty-Stevens Funeral Home. Funeral services will follow visitation at 8 o’clock in the funeral home chapel with the Rev. Jeff Gibson and the Rev. Mike Harmon officiating. Family and friends are asked to meet at Doughty-Stevens at 10:15 a.m. Thursday to travel in procession to Cross Anchor Cemetery for the 11 a.m. committal service. Active pallbearers will be Jonathan Morrison, Jackson Morrison, Mickey Brown, Caleb Brown, Tucker Brown, Mark Britton, Robert Britton, David Malone, and Jimmy Malone. Honorary pallbearers will be Benjamin Morrison, Ronnie Brown, Doyle Morrison, Raymond Cooter, Bill Brown, Glennon Brown, Dan Duggar, Johnny Ragon, Roger Fair, and the members of Union Free Will Baptist Church. The family would like to thank his caregivers from Avalon Hospice for their excellent care, especially Tracie, Shannon, and Kathy.

Johnny Bill Britton, age 81, of Greeneville, passed away Saturday night at his home surrounded by his family. He was a retired employee of Laughlin Memorial Hospital. He was of the Christian faith and loved his Lord and Savior Jesus Christ.... View Obituary & Service Information

The family of Johnny Bill Britton created this Life Tributes page to make it easy to share your memories.