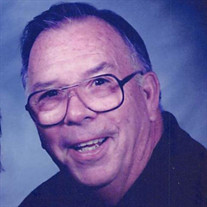 Kermit Justis, age 95, of Greeneville, passed away Sunday afternoon at Morning Pointe of Greeneville. He was born in Baileyton the son of the late Samuel and Denzil Justis. Kermit graduated from Baileyton High School and Tusculum College. In his early years, Kermit was a teacher and coach at Mosheim School and later became an employee of Magnavox, retiring after 38 years of service. He was an active member of Asbury United Methodist Church and attended faithfully until February of 2020. He was active in the Greene County Republican Party. He was a member of Mosheim Ruritan Club, Mosheim Masonic Lodge, Mosheim Chapter of the Order of Eastern Star, and the Shriner’s. Kermit was the father of two children, JoKema and Bland. JoKema’s family includes: Joe (Amanda) Ayers and their child, Avery, and Kerria Emery and daughter, Kemra. Bland and his wife, Debbie, and their family includes: Angel (Andy) Jones, Little Andy, Ally Jones, Amber Justis, Samuel Justis, Jacob Justis, and Tony Greer. Kermit’s family also includes several nieces and nephews, “The Cousins”, and special friends: Sally and Wayne Bayless and family; and a special niece: Pat Logan. In addition to his parents, he was preceded in death by his wife of 69 years: Betty Carter Justis, who died December 14, 2020; by her daughter, JoKema, who died in an accident in 1996; sisters: Ina and Everett Light, Shirley and Samuel L. Justis; brother: Llewellyn and Geraldine Justis; brother-in-law and sisters-in-law: Pauline and Kyle Logan, Anne Justis; father-in-law and mother-in-law: Pern and Dollie Nelms Carter; and a special nephew: Clark Justis. The family will receive friends from 4 – 6 p.m. Wednesday at Doughty-Stevens Funeral Home. Graveside services will be held at 1 p.m. Thursday at Carter’s Chapel Cemetery with the Rev. Jerry Jones officiating. Those who wish to travel in procession to the cemetery are asked to meet at Doughty-Stevens at 12 p.m. Pallbearers will be Samuel Justis, Jacob Justis, Eric Justis, Joe Ayres, Gary Light, and Justin Light.

Kermit Justis, age 95, of Greeneville, passed away Sunday afternoon at Morning Pointe of Greeneville. He was born in Baileyton the son of the late Samuel and Denzil Justis. Kermit graduated from Baileyton High School and Tusculum College. In... View Obituary & Service Information

Send flowers to the Justis family.