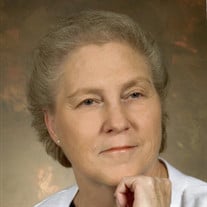 Leila Elizabeth “Liz” Lingerfelt Richards, 75, of Valdosta, GA, passed away on Friday, January 7, 2022. She was born in Johnson City, TN on October 2, 1946, to Rev. Oral Lingerfelt and his wife, the former Jessie McInturff. Liz was a member of First Christian Church of Valdosta where she served as youth leader; she spent many years visiting and serving the elderly and shut-ins in their congregation. After moving to Valdosta in 1984, Liz worked with disabled children in Valdosta City Schools as a paraprofessional. She was a member of the Azalea City Women’s Club and worked in their clown ministry for children. She was an integral part of the establishment of LAMP and spent many years running their food pantry and clothes closet. Liz spent more than two decades working for Walmart and Sam’s Club before retiring to care for her sister in Tennessee. Liz spent her life in the service of others, always representing the hands and feet of Christ. “In everything I did, I showed you that by this kind of hard work we must help the weak, remembering the words the Lord Jesus himself said: ‘It is more blessed to give than to receive.’” Acts 20:35 Liz is survived by her son and daughter-in-law Franklin Richards II (Dana) of Valdosta; daughter and son-in-law Betsy McTier (Frank) of Valdosta; her grandchildren, Noah Richards, William Richards, Benjamin McTier, and Lauren McTier, all of Valdosta; her brothers and sister-in-law, Edward Lingerfelt (Carol) of Jonesboro, TN, and Wayne Lingerfelt of Church Hill, TN; brother-in-law John Tilson of Church Hill, TN; and numerous nieces, nephews, and cousins. She was preceded in death by her parents, sister Barbara Tilson, and nephew Geoffrey Tilson. Memorial services will be held at 5 p.m. on Monday, January 10th, in the chapel of Carson McLane Funeral Home in Valdosta with Rev. Ron Nordan officiating. Visitation will be held prior to the service in Valdosta from 4 p.m. until 5 p.m. on Monday. The service will be streamed on Monday on the Tribute wall of Liz’s obituary page on www.mclanecares.com. Her committal will follow at 1 p.m. on Saturday, January 15th, at Cedar Grove United Methodist Church in Chuckey, TN. In lieu of flowers, memorials may be made to the Alzheimer’s Association, Regency Hospice of Moultrie, or LAMP of Valdosta. Condolences to the family may be made online at www.mclanecares.com or to www.doughty-stevens.com.

Send flowers to the Richards family.