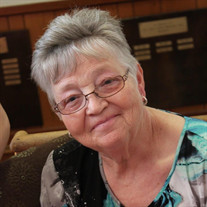 Linda Lamons Hawkins, born December 14, 1955, went home to Heaven Saturday morning at her home in Mohawk with her family by her side. She fought a good fight with terminal brain cancer. Mrs. Hawkins was a lifetime member of Mount Hope United Methodist Church. She loved her church family dearly. Survivors include her loving husband of 33 years: Charles L. Hawkins of Mohawk; four loving sons and one daughter-in-law: Shawn Daniels, Jeremiah and Amanda Daniels, Joshua Daniels, and Charlie Hawkins all of Mohawk; nine grandchildren: Cassie, Megan, Dawson, Kaylee, Colt, Kylee, Kaleb, Nora, and Caden Daniels, and Annesley Woods; one special sister and brother-in-law: Venita and Johnny Warner of Mohawk; five sisters-in-law and their husbands: Patricia and Carroll Turner of Mt. Carmel, Ruby and Donnie Livingston of Mosheim, Tracy and Mario of Virginia, Charlotte and Randy Moore of Morristown, Goldie and Sherman Allen of Bean Station; four brothers-in-law and their wives: Bill and Joaney Hawkins of Mosheim, Steve and Tiffany Hawkins of Mohawk, Randy Hawkins and Patrick Hawkins; several nieces and nephews. Linda had many special friends: including the breakfast crew at Farmers Market and Deli in Mohawk, where she worked as long as her health permitted, her great coworkers, her loving boss: Tom Patel; and her hairdresser for 29 years: Kathy Skidemore. She was preceded in death by her parents: Ray and Iline Lamons; a sister and brother-in-law: Doris and Eddie Eidson of Mohawk; grandparents: Samuel and Emma Lamons and Dave and Florence Laster; two sisters-in-law: Karen Westmoreland and Brenda Patrick; one brother-in-law: Andy Hawkins. The family would like to give a special thanks to Cindy Ward and Louise Rhea, who was like a sister, and to Amedisys for their dedication and care during her illness. The family will receive friends from 2 – 5 and 6 – 8 p.m. on Tuesday at Doughty-Stevens Funeral Home. Funeral services will be held at 2 p.m. Wednesday at Mount Hope United Methodist Church with the Rev. David Gibbs officiating. The body will be taken to the church to lie in state one hour before the service. Interment will follow in Mount Hope Cemetery. Active pallbearers will be Jeremiah Daniels, Charlie Hawkins, Randy Sauceman, Paul Evans, Dustin Eidson, and Charles Hawkins. Honorary pallbearers will be Tom Patel, Chad Eidson, Dr. Andy Roberts, Tony Lawson, Bubba Shipley, Tommy Gregg, Thomas Gulley, Angie and Kenny Pinkston, and all of her friends of Mount Hope United Methodist Church.

Linda Lamons Hawkins, born December 14, 1955, went home to Heaven Saturday morning at her home in Mohawk with her family by her side. She fought a good fight with terminal brain cancer. Mrs. Hawkins was a lifetime member of Mount Hope United... View Obituary & Service Information

Send flowers to the Hawkins family.