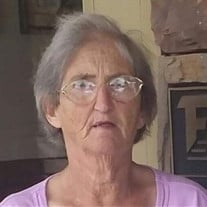 Louise Tolliver Payne, age 81, of Greeneville, died Wednesday at the home of her sister, Judy, in the Ducktown Community of Limestone on the farm where they were raised. Louise was born July 8, 1939 in Sullivan County, the oldest of four daughters born to the late Hayes and Blanche Quillen Tolliver. At a young age she began working on the family farm alongside her father and was the Valedictorian of her 1957 graduating class at Chuckey High School. In her early years, she worked at Hurd Lock and Magnavox and then in the early 1970’s, she returned to the farm with her husband, Ralph. Louise’s father taught her the value of hard work, a trait she passed on to her children and her grandchildren. She was the model of a strong woman, a hard worker, one who never gave up, and completing a task. Louise struggled with numerous health issues over the years, was a two-time cancer survivor, and still she kept going, until she hurt herself on December 12th while working at her home. Louise supported her family and their activities and endeavors in school. She loved sports and attended as many of her children and grandchildren’s games as possible, sometimes loudly, depending on the referee’s call. She loved all animals. She had attended New Ebenezer Church and the former First Free Methodist Church. Survivors include two sons and daughters-in-law: Billy and Jeannie McCrary, Jackie and Teresa McCrary; one daughter: Katrina Payne Seaton; former daughter-in-law: Kathy Ottinger McCrary; one granddaughter: Laura McCrary Harville and husband, Neal; seven grandsons: Boone McCrary and wife, Christie, Ethan McCrary, Christopher Seaton and wife, Kristen, Ben Seaton and wife, Dana, Matthew Seaton, Braden Seaton and Jaelyn Collins, and Bradley Seaton; two great-grandsons: Hayes and Thaddeus Harville; six great-granddaughters: AnnaBelle, Eleanore, Penelope, and Lorelei Harville, Reagan and Delaney Seaton; three sisters and a brother-in-law: Judy and Richard Harrison, Jane Luster, and Helen Turnmire; brothers-in-law and their wives: Alfred and Judy Payne, Clyde and Phyllis Payne; three special nieces: Carrie Hall, Sabrina Tarlton, and Melissa Scott; special friends: Sandra Weller, Emma Frances Susong, Mike Davis, and Ken Baughman; several nieces, nephews, great-nieces, and great-nephews; and her dog: Sally. In addition to her parents, she was preceded in death by her husband, Ralph H. Payne; father-in-law: Howard A. Payne; mother-in-law: Bell Shipley Payne; brothers-in-law: Joe Luster, Sherman Turnmire, and Bill Scott; and sister-in-law: Charlotte Payne Scott. The family will receive friends from 4 – 7 p.m. Sunday at Doughty-Stevens Funeral Home. The funeral service will follow at 7 o’clock Sunday evening in the funeral home chapel. The Rev. Jim Fillers will officiate. Family and friends are asked to meet at Doughty-Stevens at 10:15 a.m. Monday to go in procession to GreeneLawn Memory Gardens for the 11 a.m. committal service. Active pallbearers will be grandsons. Honorary pallbearers will be Mike Davis, Ken Baughman, David Hensley, Chris Hall, Mickey Tarlton, Richard Harrison, Hayden Anderson, Austin Anderson, Connor Hall, and Reid Tarlton. The family extends special thanks to the staff of Smoky Mountain Hospice, especially Allie Long.

Louise Tolliver Payne, age 81, of Greeneville, died Wednesday at the home of her sister, Judy, in the Ducktown Community of Limestone on the farm where they were raised. Louise was born July 8, 1939 in Sullivan County, the oldest of four daughters... View Obituary & Service Information

The family of Louise Tolliver Payne created this Life Tributes page to make it easy to share your memories.

Send flowers to the Payne family.