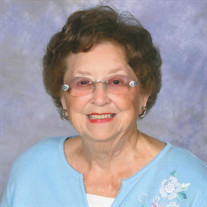 Maxine Lane Humphreys of Greeneville passed away Tuesday at 5:30 pm at her home surrounded by her family. She was 97. She was born on August 2, 1924, a daughter of the late Oscar and Ollie Southerland Lane. Maxine Lane Humphreys was a member of Tom Brokaw’s Greatest Generation; she and her brothers and sisters grew up in the Devil’s Elbow section of Greene County. They would walk together to Crescent School, a distance of five miles each way. She attended the junior high and then Greeneville High. She and Ransom Humphreys were married on February 16, 1942. During World War II, while her husband was serving in the United States Army, she worked for the Tennessee Eastman Company in Oak Ridge. She lived in the barracks and was part of the Manhattan Project that eventually won the war for the Allies. She was honored in Oak Ridge in 2010 by the War Department as part of the Women who worked on the YK-12 Project. Maxine began her career as a news reporter in 1953 at WGRV. The owner of the station, Paul O. Metcalfe, asked her if she planned to stay for a while as the reporter. Sixty-one years later, she retired as one of the longest on the air news reporters in the state of Tennessee. In 2016, she was inducted into the Tennessee Radio Hall of Fame. She was a lifelong member of First Church of God, where she served as a Sunday School teacher for over 50 years. She was Junior Choir Director, Missionary Board member, and sang in the choir for decades. With her classically trained voice, she was a talented singer, who sang at many local weddings and funerals. She loved to sing specials at church and her favorite hymn to sing was “Zion’s Hill”. Maxine loved her family, her church, and most importantly, Jesus. She held many offices in the church, and was most proud of being a Sunday School teacher for over five decades. Her last Sunday School class was the Crusaders. She dearly loved the members of that class. She was a member of the Nolachuckey Chapter of Daughters of the American Revolution, where she served as Chaplain for several years. Maxine Lane Humphreys lived a fulfilled life. She touched many people with her radio broadcasts, her talented voice, her love of her church and God. The world is a better place because of her life. Survivors include two sons and one daughter-in-law: Eddie and Linda Humphreys, Philip Ransom Humphreys; two grandchildren: Philip Lane Humphreys and his wife, Rachel, and Laura Elizabeth Humphreys; two great-grandchildren: Addison Lane Humphreys and Gracie Ruth Humphreys. In addition to her parents, she was preceded in death by her husband of 58 years: Ransom Humphreys, who died November 20, 2000; an infant daughter: Letitia Humphreys; sisters: Louise Rippetoe, Beulah Chinery, Amelia Crosby, Hazel Lee, and Helen Bird; brothers: Kenneth Lane, Alvin Lane, and Paul Lane. The Humphreys family would like to express their appreciation to the staff of Amedisys Hospice for their care and support during Maxine’s illness. The family will receive friends from 1 – 3 p.m. on Sunday, November 14th, at First Church of God on West Main Street. A celebration of Maxine’s life will follow at 3 p.m. with Dr. Nathan Leasure officiating. Burial will follow in GreeneLawn Memory Gardens. Active pallbearers will be Ronnie Rippetoe, Reggie Waddell, Steve Ottinger, Bryon Trantham, Ron Metcalfe, and Nathan Humbard. Honorary pallbearers are Bennie Rippetoe, Dr. Richard Aasheim, Dr. Joe Austin, Jerald Jaynes, Ray Smith, Ray Elliot, Pete Luttrell, Roy Klumb, Don Chinery, and Kenneth Chinery. In lieu of flowers, memorial contributions may be to First Church of God, Locust Springs Christian Retreat Center, or to Niswonger Children’s Hospital. Doughty-Stevens Funeral Home, who is honored to have been Maxine’s sponsor for 61 years, is in charge of funeral arrangements.

Maxine Lane Humphreys of Greeneville passed away Tuesday at 5:30...

Send flowers to the Humphreys family.