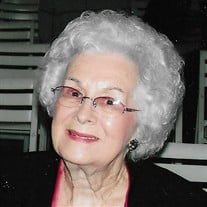 Patsy Ruth Carter Love of Idletime Drive, passed away Sunday morning at Life Care Center of Greeneville. She was the daughter of the late Jesse R. and Stella Myers Carter of the Romeo Community. After graduating from Baileyton High School in 1944, she entered the Greeneville School of Business and following graduation she moved to Cumberland, KY, where she lived with her maternal grandmother, Carrie Weems Myers. She was employed by Time Finance Company until December 1946 when she moved back to her Romeo home and started working for WGRV Radio. She retired from WGRV in 1990 with 43 years of service. Mrs. Love was a 50-year member of Christ United Methodist Church and had served with her husband as Youth Group leader. She was a member of the Wesley Class and Inspirational Ladies Group. She was an over 50-year member of the Baileyton Order of Eastern Star Chapter No. 319. On March 22, 2009, she moved her church membership back to the church she grew up in, Romeo United Methodist Church and attended there as long as her health permitted. Survivors include a daughter: Susan Love Vaughn and husband, Rhett; three grandchildren: Amber Mathes and son, Aiden Gentry, Madison Rebecca Vaughn, and James Seth Vaughn; brother: Fred Carter and his wife, Mary Ruth Russell Carter; nephews: Dean Carter and his wife, Nancy, Bryan Carter and wife, Wendie, and Jim Carter; niece: Linda Carter; special cousin: Mary Sue Brakebill. She was preceded in death by her husband of 59 years: David Madison Love, who died October 27, 2008; two daughters: Kathy Love and Angie Love; three brothers: Ralph Carter, Dudley Carter, and her beloved brother, Phil Carter. Graveside services will be held at 2 p.m. Wednesday at Price’s Cemetery at Romeo. The Rev. Doug Jennings will officiate. Those who wish to travel in procession to the cemetery are asked to meet at Doughty-Stevens at 1 p.m. The body will lie in state at Doughty-Stevens Funeral Home from 2 – 6 p.m. on Tuesday for family and friends to pay their respects. Active pallbearers will be Alfred Shaw, Garry Reaves, Chris Wilhoit, Dean Carter, Bryan Carter, and Terry Robert Carter. Honorary pallbearers will be Charlie Garant, Ray Adams, Dr. Joe Austin and his nurse, Vicki, Ted and Louise Wilhoit, Dr. Stephen Flohr, Dr. David Jones, Chuck and Rhonda Gray, Lee Southerland, Robert and Carla Bailey, Ron Woods, and Gene and Loraine Hilton.

Patsy Ruth Carter Love of Idletime Drive, passed away Sunday morning at Life Care Center of Greeneville. She was the daughter of the late Jesse R. and Stella Myers Carter of the Romeo Community. After graduating from Baileyton High School in... View Obituary & Service Information