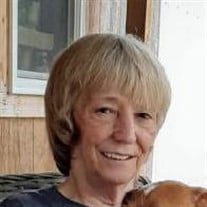 Penny Ledesma, first born to Elwin and Patricia Cornell in Lansing Michigan on January 25, 1948 peacefully passed away Tuesday September 21st surrounded by her family and loved ones. Penny attended Eastern High School where she met the “love of her life”, Joe Ledesma. They were united in holy matrimony July 17th, 1965, thus beginning a true “Love Story”. During the 56 years of marriage Penny was blessed to give birth to 2 children, Tonya and Joe. She loved spending time on Lake Michigan and the family went to their home away from home every weekend to spend time on the sandy shores. After Penny retired from Farm Bureau she took the grandchildren to her special secluded spot on Lake Michigan every summer. She loved collecting sea glass, driftwood and Petoskey Stones. The grandchildren would make a competition to see who could find the most treasures for their “Nanny” Spending time in the great Up North allowed her to enjoy many other things she loved like campfires, mushroom hunting, flea marketing and even motorcycles and skiing. Penny had an eye for antiques. She attended auctions and estate sales looking for her favorite glassware such as, Fire King, McCoy, Depression Glass and more. Penny enjoyed collecting antiques so much she eventually opened her own store in Mancelona, Michigan called, Penny’s Past and Present. She also retained a large unit at the Flea Market in Copemish, Michigan where she and the love of her life displayed and sold the beautiful antiques she had collected. Penny loved her family dearly and many would call on her for advice or just to have a shoulder to listen to them. They knew she would give them the honest truth, regardless if it was not what they wanted to hear. There is nothing Penny would not do to help someone, even if it meant her own self sacrifice or forfeiting her personal needs and desires. On several occasions Penny opened her home up to family and non-family members just so they could get their feet on the ground. She never asked for a cent or anything in return. Though at times this was difficult, Penny would manage and selfishly deny herself comfort to accommodate others. Although Penny had a full happy life, she longed for something else. Penny believed the Lord was opening new doors in her life. Her belief soon became a reality in 2018. Leaving the only life, she ever knew, Penny and the love of her life made a life-changing transition. Their homes and properties were sold and they made a move to Greeneville, TN where their daughter resides with her husband. This move began a whole new chapter of adventure in their love story. Though the beauty of the Great Lake and sandy beaches would be missed, the breathtaking vision of the majestic mountains brought an overwhelming sense of serenity and peace. Soon after settling, Penny and her love began attending Flag Branch Church of God in Greeneville, TN. Her soul and spirit was stirred in that small country church where Pastor Willis Bowers preached and eventually Penny found another peace. A peace that passes all understanding. A peace that comes only from God. She found God’s only Son, Jesus Christ and accepted Him as her personal Savior. Penny later openly confessed her new-found relationship in Christ by following Him in water baptism. It was shortly after her baptism that Penny found a third peace. Within a matter of a few years, Penny found what her soul and heart longed for. She found what many people search a life time for but never find: PEACE. A peace no one will be able to hinder; a peace the world cannot give or take away. Penny entered in to this peace and rests in the arms of her Lord and Savior, and there shall she be forever more. Survivors include her spouse: Joe Delores Ledesma; Children: Tonya Lee Shelton (Jim Shelton) and Joe Al Ledesma (Diane Wasson); Grandchildren: Andrea M. Pedigo (Justin L. Pedigo); Kristi L. Ledesma, Michael J. Finnerty, Danielle H. Ledesma-(Deceased); Michelle L. Finnerty; great-grandchildren: Makenzey E. Finnerty, Korbin J. Finnerty, Kierra P. Stollenmaier, Evelyn W. L. Archer, Presley A. Ledesma; Siblings: Elwin Cornell, Robin J. Cornell; several great grandchildren; nieces and nephews: Tammy S. Jackson (Jeremy Jackson), Elwin Cornell (Dania Cornell), Robert L. Dubois (Amanda Dubois) Crystal L. Schafer, Raquel J. Miller. The family will receive friends from 4 – 7 p.m. Friday at Flag Branch Church of God with the funeral service following at 7 p.m. The Rev. Willis Bowers will officiate. Family and friends are asked to gather at Flag Branch Cemetery at 1 p.m. for the committal service. Pallbearers will be Michael Finnerty, Larry Koutsobos, Justin Pedigo, Krisi Ledesma, Andrea Pedigo, Michelle Finnerty, and Mark Finnerty. Special Gratitude is extended to Dr. Sonja Woods, Dr. Dharmen Patel, Dr. John Boys, Ally and Angela w/Smokey Mountain Hospice. Doughty-Stevens Funeral Home is in charge of arrangements.

Send flowers to the Ledesma family.