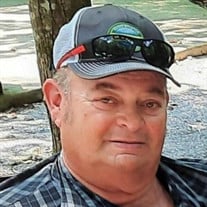 Randall Weylin “Hummer” Cutshaw Randy Cutshaw of the Cedar Creek community, passed away peacefully in his sleep on Sunday night and was discovered by his family the following morning on November 8, 2021. He is survived by his brothers: Kirk (Kathy) Cutshaw, and Todd (Lisa) Cutshaw; nieces: Tanya (Michael) Rogers, and Brandy (Jimmy) Cutshall; nephew: Daniel (Karen) Matheney; and honorary nephew: Justin Matheney; great-nephew and great-niece: Michael, Jr. and Michele Rogers; great-nephew: Josiah Matheney; aunts: Wanzie Bolen, Portia Cramer, Sandy (David) Dudich, Nadean Wesley; several cousins and their families. Randy was preceded in death by his mother: June Fillers Cutshaw Bledsoe; his father: Leroy Cutshaw; his aunt: Carrol Edens; and his maternal grandparents: Luke and Swanee Fillers, previous owners and operators of the Fillers Mill. Randy was a member of Solomon Lutheran Church where he made lifelong memories. For many years he assisted with the church’s lawn and cemetery maintenance and enjoyed participating in the annual Christmas play entitled, “Come to Bethlehem”. Randy often played baseball at Cedar Creek School, with neighborhood friends and was fondly nicknamed “Hummer” due to the speed in which he could pitch a baseball. Randy and his brothers learned the feed milling trade from their grandfather, Luke. At his grandfather’s passing in 1995, Randy became part owner of the mill and continued the business. In August 2001, a flood caused immense damage to the structure and ceased operations. Soon after, Randy began working at River Trace Golf Course/Nolichucky View Golf Club. Before Nolichucky View was closed, Randy was invited to join the groundskeeping team at Link Hills Country Club where he enjoyed working until his passing. Randy’s nieces, nephew, great-niece and great-nephews brought him much joy. He loved spending time with them and watching them grow. Most recently, Randy spent time teaching his great-nephew, Michael (age 9) about hunting and trapping, always picked at his great-niece Michele (age 9) to make her laugh, and taught his great-nephew Josiah (age 4) how to shake hands. Randy was a passionate outdoorsman and spent most of his life fishing, trapping, and hunting with friends and family. Services will be held at Solomon Lutheran Church on Saturday, November 20th. Visitation will be at 10:00 AM, the memorial service at 11:00, and the burial immediately after. Randy’s family is grateful to the EMS responders, Sheriff’s Deputy, and Doughty-Stevens Funeral Home staff for their assistance. In lieu of flowers, memorial gifts may be made to the Solomon Lutheran Church Cemetery Fund.

Randall Weylin &#8220;Hummer&#8221; Cutshaw Randy Cutshaw of the Cedar Creek community, passed away peacefully in his sleep on Sunday night and was discovered by his family the following morning on November 8, 2021. He is survived by his... View Obituary & Service Information

Send flowers to the Cutshaw family.