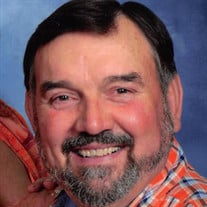 Rex Carroll Bowers, age 72, passed away on Tuesday, March 9, 2021, at Fort Sanders Regional Medical Center in Knoxville, TN due to complications from multiple strokes. Rex is survived by his precious wife: Debbie “Dicey” Bowers of 37 ½ years; his beloved son and best friend: Eric Bowers both of Greeneville. Additionally, he is survived by his four brothers and their wives: Wayland Bowers, Dennis and Sharon Bowers, Jackie and Debbie Bowers, and Tim and Gail Bowers; niece: DeAnna Morgan; nephew: Brandon Bowers; brother-in-law: Buford Davis; sister-in-law: Hellen Davis all of Greeneville; sister-in-law: Caroline Collins of DeKalb, IL. He also left behind his four very loved fur babies: Bo Duke, Shotgun, Tucker, and Bear. He was preceded in death by his parents: Roy and Edith Bowers of Greeneville; as well a sister: Belinda Bowers of Greeneville. The family was supported during this difficult time by close and dear friends: Jerry and Judy Charlton, Johnny Davis, Gary Bowers, Spencer and Savannah Mathes, and Rev. Richard and Mary Kay Steele and family. Also remembered are friends Donnie and Page Streeter, Peggy Rainwater, co-workers at Interstate Vending and also co-workers at Alpine (Ecoquest). The family also thanks those at Fort Sanders Regional Medical Center beginning with the nursing staff that cared untiringly for Rex, as well as: Dr. Jaime Oakley and staff, Dr. Jay Warrick, Dr. Sung Yong Bae, and Dr. Mark Chang. Additionally, the family wishes to recognize Goshen Valley Church of God, Cedar Creek Church of God, Chuck and Pam Bowers, Mckenzie and Tyler, and all of Rex’s farm hay buddies. Rex was born February 6, 1949, in the South Greene Community and he graduated in 1967 from South Greene High School. He worked at Interstate Vending for 24 years as a truck driver and distributor before working for Alpine (EcoQuest) for just over 10 years, all the while he was working on his farm. He found great satisfaction in his farming and it quickly became a hobby of which he used to generously give to and bless all those around him. He was always to be found on his John Deere tractors or his older two-cylinder tractors. Rex was a comedian at heart and known for his quick-wit and jokes, as he loved to make people laugh. He married Debbie on September 12, 1983 and together they welcomed their only child, Eric, born on January 28, 1995. The family will receive friends from 3 – 5 and 6 – 8 p.m. on Monday at Doughty-Stevens Funeral Home. Funeral services will follow visitation at 8 o’clock in the funeral home chapel with Pastor Kenny Collins, Pastor Richard Steele, and Pastor Dwayne Pierce officiating. It is requested that those in attendance wear a mask. Family and friends are asked to meet at Doughty-Stevens by 10:15 a.m. Tuesday to travel in procession to GreeneLawn Memory Gardens for the 11 a.m. committal service. Pallbearers are Rex’s hay buddies: Johnny and Lucas Davis, Wesley Birdwell, Stevie Waddell, Camden Pegg, Preston Shuffler, Eddie Crum, Gary Bowers, and Spencer Mathes.