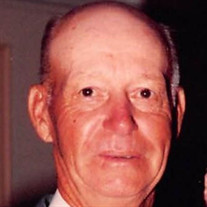 To view service click link: https://view.oneroomstreaming.com/authorise.php?k=1630173864133430 Robert “Bob” Evans passed away peacefully on Wednesday morning August 25th , just 5 days after his 97th birthday, at his home. He attended First Christian Church, loved the Lord and kept a Bible on the table beside his favorite recliner. Bob retired from Magnavox after 30 plus years of service, having worked his way from Custodian to Supervisor. He also was an avid farmer, loving the outdoors and animals. His favorite two animals were his Donkeys, Jasper and Thomas. He was a devoted husband, father, grandfather and great grandfather always working to provide the best for his family. He enjoyed hunting, fishing and golf, but his true love was farming. Growing up in the 30’s farming was an essential part of life. He farmed on family farmland in Clear Springs for many years as an adult. He enjoyed passing his knowledge and passion on to his children and grandchildren. He would meet with his buddies on a regular basis at Crossroads Grocery for their weekly game of Rook. He was a very caring, giving and simple man who enjoyed the simple things of life. He was drafted into the Navy at the age of 19 and attained the rank of Petty Officer 3rd Class while earning a Presidential Citation, an Atlantic Theatre Ribbon and a Pacific Theatre Ribbon. He was on the shores of Normandy on D-Day, June 6th, 1944 operating a landing craft that dropped infantrymen onto land and into battle knowing that many of them would not return home. The memories of that time burned in his mind throughout his life. After returning home for a brief stay he was shipped to the Pacific Ocean to the island of Okinawa and was honorably discharged in 1946. He is survived by two daughters and sons in law; Judy and Kenneth Holtsclaw and Jane and Jim Allen; two sons and daughters in law, Randy and Patricia Evans and Michael and Shannon Evans; seven grandchildren, Josh (Corinne) Allen, Jeremy (Marlana Pratt) Holtsclaw, Lance (Kristen Little) Holtsclaw, Katie Evans (fiancée Jesse McNeese), Grace Evans, Jabez Evans, Lindsay Evans; five great grandchildren, Ben Allen, Jacob Allen, Madison (Jordan) Porterfield, Ethan Holtsclaw, Cruz Holtsclaw and a special little girl Madison Terry; two special nieces, Michella (Don) Estes and Chrystyl (Michael) Dimler; special friends, Dean and Sharon Tipton, David Harrison, Chris Gray, and Lisa McCamey and the staff at Aunt Bea’s. Mr. Evans was preceded in death by his wife of 54 years, Frances Hartsell Evans; his parents, W.H. and Viola Adams Evans; two brothers, Gail Evans and John Jay Evans; one sister, Athyne Shanks; and a granddaughter, Mallory Allen. The family would like to express their gratitude for the loving care from the staff of Amedisys Hospice Care and two special caregivers, Ashley and Kelle. The family will receive friends Saturday from 2-5 pm at Doughty-Stevens Funeral Home with the funeral service following visitation at 5 pm in the funeral home chapel. Tootie Wright will officiate and Jim Allen will deliver the eulogy. A graveside service will be held Sunday afternoon at GreeneLawn Memory Gardens at 2:00 pm. Friends and family will meet at the funeral home at 1:00 pm to go in procession to the cemetery. Pallbearers will be Josh Allen, Ben Allen, Jacob Allen, Jeremey Holtsclaw, Lance Holtsclaw, Steve Tipton and Jesse McNeese.

Send flowers to the Evans family.