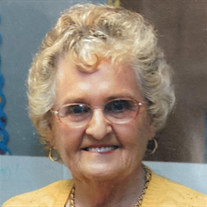 Sadie Keller Weems, age 84, of the Ottway Community, passed away early Tuesday morning at Greeneville Community Hospital East after a long and courageous battle with dementia. She was the daughter of the late Harvey and Elizabeth Keller. Sadie was quick witted and never met a stranger. Anytime she was around, there was always a good time with lots of laughter. She loved being outside and mowing her yard was her favorite task. Nothing suited her more than getting to mow two or three times a week when lots of rain had fallen. Sadie was an avid baseball fan. When Kenton was a young boy, he, Sadie, and Kenneth along with their friends, Jack and Nancy Kilday, spent many vacations traveling to many different MLB fields to watch the games. Her favorite team was the New York Yankees and she enjoyed taking trips to New York with her two sisters-in-laws, Jane Stroud and Jean Barnes, both of whom she loved like sisters. When Sadie wasn’t watching the Yankees, she could be found at Pioneer Park watching the Greeneville Astros play. She held a season pass and sat in the same seat for many years. When her grandson, Jacob, was born and began to talk, he called her Sa-Sa and the name stuck. All of the children who knew and loved her ever since has called her the same name. When Jacob and Jared began to play basketball at Ottway you could always find her somewhere in the gym sitting on the top row cheering them on. As Jared, started to play ball at North Greene, she began to have trouble with her memory and could not get to the games anymore. During this time, she started to ride to the games with her good friends, Frances, Shelby, and Nancy, who she jokingly named The Golden Girls. Sadie was loved by many and will be greatly missed. She attended Ottway United Methodist Church as long as her health permitted. She taught Sunday School for many years. Sadie had been looking and waiting for many years for her daddy and momma to come and get her. We know that she has now entered Heaven with her God, her daddy, and momma waiting to welcome her in at the Pearly Gates. Survivors include one son and daughter-in-law: Kenton and Pam Weems; grandsons: Jacob Weems and his wife, Kaylee, Jared Weems and his girlfriend, Bailey Cheek; step-grandchildren: Lauren Bowers, Brent Bowers and his wife, Ashley; step-great-grandchildren: Presley and Carter Bowers; sister-in-law and brother-in-law: Jane and Joe Stroud; nieces: Jamie Weems Drain, Janie Barnes Millstead, and Sandra Stroud Babb; nephews: Kellen Keller, Donald “Ducky” Keller, Kieffer Keller, Tim Stroud, and B.J. Barnes; special friends: Jack and Nancy Kilday, Jack and Brenda Neas, Thomas and Frances Johnson, Nancy Casteel, Shelby Gass, Al and Amy Dugger. In addition to her parents, she is preceded in death by her former husband and friend: Kenneth Weems; brother: Donald Keller; sisters-in-law: Jean Barnes and Inga Keller; brother-in-law: Keith Weems. The family will receive friends at Doughty-Stevens Funeral Home from 4 – 8 p.m. Saturday. Funeral services will be held at 2 p.m. Sunday in the Doughty-Stevens Chapel with the Rev. Nathan Reynolds officiating. Interment will follow in Carter’s Station Cemetery on Albany Road. Active pallbearers will be Chris Gray, Dan Walker, Randy Carter, Jeff Brooks, Mark Britton, and Zane Britton. Honorary pallbearers will be Doug Carter, Mike Massey, Tim Stroud, Johnny Collins, Tim Weems, and Kameron Keller. In lieu of flowers, memorials may be made to Ottway United Methodist Church. The family would like to express a special thanks to Greene County EMS, the ICU and 4th floor nursing staff at Greeneville Community Hospital East, and to the nurses and staff of Caris Hospice.

Sadie Keller Weems, age 84, of the Ottway Community, passed away early Tuesday morning at Greeneville Community Hospital East after a long and courageous battle with dementia. She was the daughter of the late Harvey and Elizabeth Keller. Sadie... View Obituary & Service Information

Sadie Keller Weems, age 84, of the Ottway Community, passed away...

Send flowers to the Weems family.