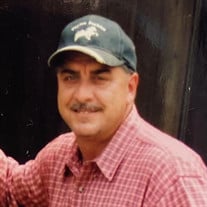 Timothy Earl Taylor On Monday, February 8th, 2021, Tim “Toolman” Taylor, loving father of four and great friend to many, was called home to be with the Lord at the age of 52. Tim was born on July 19th, 1968 in Greeneville, TN. He attended West Greene High School, served in the Army National Guard, was a practicing Christian, and was a successful car salesman. To know Tim was to love him because you knew that he loved you back. He had a different way of showing this love to everyone, but no one ever felt unloved when they were with him. His world revolved around his children and his family, whom he thought the world of and would have given the world to if he were able; if you were a friend of Tim’s kids, you were always treated like one of his own. He was an outdoorsman who loved fishing, camping, swimming, and riding four-wheelers. He also loved riding, training, and showing his horses, who each held a special place in his heart. The only thing he enjoyed more than these activities was when he could share them with his family and friends. He taught each of his three sons what hard work looks like and what it means to be the man of the house, and he taught his daughter the true love and respect she should expect and that she is deserving of. His friends were always gifted with his contagious sense of humor, his undying loyalty, and his selfless acts of kindness. While Tim is no longer with us here on Earth, the memory of how he loved each and every person he met will live on forever in our hearts. He was survived by his children: Brandon Taylor and his wife Ashley, Curtis Taylor and his wife Samantha, Megan Randolph and her husband Brandon, and Kameron Taylor; his brother: Chris Taylor; stepfather: L.T. Daniels; two stepsisters: Kristi Daniels and Becky Simmons; two aunts: JoAnn Marshall and Carolyn ‘Tod’ Dingus; uncle: Jerry Dingus; six grandchildren and two step-grandchildren; and several special cousins. He was preceded in death by his mother: Linda Taylor Daniels; his father: Earl “Buddy” Taylor Jr.; his grandparents: Sant and Francis Williams and Earl and Unav Taylor; two aunts: Mary Jane Brockwell and Patsy Fortner; and a cousin: Mike Fillers. The graveside service will be held Wednesday, February 17, 2021 at 2:00 p.m. at Jackson’s Chapel FWB Church Cemetery with Pastor David Dugger officiating. Active pallbearers will be Chris Taylor, Brandon Taylor, Curtis Taylor, Kameron Taylor, Brandon Randolph, Mark Kesterson, and Lonnie Songer. Honorary pallbearers will be Tavis Barnard. His children would like to show appreciation to their friends and family for the kind words, thoughts, and prayers. Doughty-Stevens Funeral Home is in charge of arrangements.

The family of Timothy Earl Taylor created this Life Tributes page to make it easy to share your memories.

Send flowers to the Taylor family.