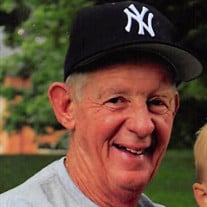 William (Bill) Karl Lorch known by many as simply “Coach,” 79, passed away peacefully at home on Saturday, July 10th. Born on March 16, 1942, in Elizabeth, NJ, Bill graduated from Abraham Clark High School, Roselle, NJ in 1960 and joined the U.S. Coast Guard as a seaman on icebreaking ships off the Alaskan coast until his honorable discharge in 1964. In 1968, Bill graduated from Rockland Community College in Suffern, NY with an Associate’s Degree in Business Administration. He then continued his higher education at Tusculum College, Tusculum, TN graduating in 1971, “Cum Laude” with two Bachelors’ Degrees in Elementary Education and Physical Education. He earned a Master’s Degree in Elementary School Administration in 1977 from ETSU. Athletics were an important part of Bill’s growing years. He excelled in basketball, track, football and baseball, earning numerous varsity letters in high school and college. He ended his four year collegiate basketball career with an excess of 1,500 points. In 1988, he was inducted into the Tusculum College Sports Hall of Fame, an accomplishment of which he was extremely proud. Bill began his 36 year teaching career at Andrew Johnson and Crescent Elementary Schools transferring to Hal Henard Elementary School upon completion of the new combined K-5 facility. He was much loved and remembered for riding kindergarteners on his shoulders down to the gym on their birthdays. He retired in 2006; however, his love of teaching inspired him to substitute for many years thereafter. Coaching was Bill’s passion. He began with Freshman Basketball in 1972, and completed with a record 80 wins and 59 loses over 9 years. This included three District 2 Championships, two District 2 Runner-Ups, and one 3rd place finish in District 2. In 1986, Coach Lorch developed the Greeneville High School Soccer Program. At that time, he knew nothing about the game of soccer. In the development of this program, he worked many hours to learn and teach the necessary skills of the game. To this day, his players admire and honor his expertise and his loving and personal commitment to every player’s growth and development in life. His impact as a coach was phenomenal, and is remembered to the present day. He coached the Greeneville High School Boys’ Soccer Team from 1986 to 1995 (9 years). His overall record was 81 wins, 28 loses, and 9 ties, with 8 winning seasons, 6 IMAC Championships, two 2nd place finishes, three District 1 Championships, and three 2nd place finishes. He coached the Greeneville High Girls’ Soccer Team from 1986 to 2001 (15 years). His overall record was 130 wins, 89 loses, and 17 ties, with 8 winnings seasons, 8 IMAC Championships, 4 District Championships, 13 trips to Region I Semifinals, and one trip to the Region I Finals. He was selected as Boys’ Soccer Coach of the Year in 1991 and 1995, and Girls’ Soccer Coach of the Year in 1995 and 1999. Bill also coached Greeneville Middle School Track from 1979 to 1986, Greeneville High School Track from 1999 to 2005, South Greene High School Soccer from 2002 to 2004, and 2006, and Greeneville High School Girls B-Team Softball in 2003. Upon retirement, Bill pursued his love of refinishing antique steamer trunks and was always on the hunt for unique samples. Empire dressers and antique frames were also items he favored. He made frequent visitations to The Burlap Bunny, The Treasure Chest, Back Porch, Greeneville Antique Market, Baileyton Antique Mall and General Mercantile sometimes just to chat or hang out for bit. Additionally, Bill had a love for ball caps. He had quite the collection of New York Yankee and Cleveland Browns caps. Bill is survived by Joann Hackmann, his loving wife of almost 49 years, two daughters, Karrie Lasko and her fiancée Chuck Evans and Kristin Ball, three grandchildren, Jake and Addi Lasko and Sophie Ball, mother-in-law Naomi Hackmann, all of Greeneville, sister-in-law and brother-in-law Chris and John Ciardi of Portland, OR, and brother and wife Daniel and Jean Lorch of Tucson, AZ. He was preceded in death by his parents William Jacob and Dorothy Tobiasson Lorch, his father-in-law Henry J. Hackmann, and his friend and mentor Dennis Landadio. The family will receive friends at Doughty-Stevens Funeral Home from 3 - 7 p.m. on Thursday with a remembrance service following at 7:30 p.m. in the chapel with Pastor Jamie Lively officiating. Family and friends are asked to gather at Doughty-Stevens at 10:15 a.m. Friday to go in procession to Oak Grove Cemetery for the 11 a.m. committal service. Pallbearers will be Chuck Evans, Walter Graham, Doug Debusk, Jonathan Lasko, Chris Stills, and Adam Gothard. Honorary pall bearers will be all the men and women Bill coached throughout his coaching career. The family thanks the Vanderbilt-Ingram Cancer Center, Dr. Leora Horn for including Bill as the first patient in an immunotherapy study, Dr. Anvil V. Tumkur and Dr. John C. Boys for their positive influence in Bill’s later days, and all his precious friends at local antique shops, especially Danny and Dee Sullivan, Rebecca Wolfe, Natasha Gray, and Janet Winchester.

Send flowers to the Lorch family.