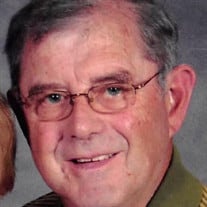 Woodrow “Woody” Wilburn, age 81, of Greeneville, passed away peacefully Monday, February 28th 2022 at his home. Woody made the decision to become a Christian early in adulthood. Because of his faith, his family can claim the promises found in John 11:25-26 “I am the resurrection and the life. Whoever believes in me, though he die, yet shall he live, and everyone who lives and believes in me shall never die. Do you believe this?” and in Luke 23:43 “And he said to him “Truly I say to you, today you will be with me in Paradise.” Woody was born in Campbell County, TN on November 27, 1940 to Edd and Opal (Rookard) Wilburn. He was the oldest of seven children. He married Wanda (Lamb) Wilburn October 12, 1963. As a young man, Woody was manager of Powell’s Five and Dime in Lake City, TN before entering into the United States Army in 1966. He received his Bachelor of Science degree in Business from Steed College. Woody served in Vietnam and proudly attained the rank of Sergeant. He was awarded the Army Commendation Medal for meritorious service in the Republic of Vietnam, from December 1966 to November 1967. After returning from Vietman he served as Postal Service Supervisor in Fort Lee, VA. He was honorably discharged and worked for the U.S. Postal Service in Greeneville, TN, from where he retired as clerk and financial manager. He was often referred to as everyone’s favorite postal clerk- always happy to serve with a smile and a kind word. Woody fought valiantly against Parkinson’s Disease since 2001. Woody was a member of Towering Oaks Baptist Church, having served faithfully there until he was no longer able due to declining health. He was an active member in the choir there, having served as choir president and participating in numerous cantatas and programs. He also taught Fourth Grade Sunday School for many years. Woody and Wanda were married for over 58 years and raised three children. Woody was a loving and caring husband, as well as a wonderful, loving father. However, his favorite role of all was in being “Granddaddy” to his precious grandchildren Dane and Kendall. He could be found spending his retirement with them, doting over them and spoiling them-just as a grandfather does. Woody is survived by his wife, Wanda, of the home; his son Tyler Wilburn and wife Melanie of Greeneville and their children Alyssa, MacKenzie and Sam DeRocker, his daughter Ashley Foulks and husband Daniel of Cleveland, TN and their son Dane, and his granddaughter Kendall Hastings, also of Cleveland, TN. Additionally he is survived by his siblings Johnny Wilburn, Bill and Denise Wilburn, Eddie and Vickie Wilburn, Kenny and Elaine Wilburn, and Sheila (Wilburn) and Ken McNeeley. He is also survived by several nieces and nephews. In addition to his parents, he was predeceased by his sister Shirley Kibble and his daughter Holly Christine Wilburn. A graveside service will be conducted at GreeneLawn Memory Gardens on Saturday March 5th at 2 p.m. The Rev. Dennis Shumate will officiate. The Greene County Honor Guard will conduct military rites. There will be no formal visitation. In lieu of flowers, the family requests donations be made to Shriner’s Hospital for Children, Attn: Processing Center, PO Box 947765, Atlanta, GA, 30394 OR Tunnels to Towers Foundation, 2361 Hylan Boulevard, Staten Island, NY 10306 The family would like to express their gratitude to Amedisys Hospice, in particular Tammy Ambrose and Mary Whaley, for their exceptional care of Woody. Additionally, they would like to thank Sandra Jackson from All Ways Caring as well. Woody was also given outstanding care by Dr. Robert Mosca and his nurse, Becca. Psalm 79:26 “My flesh and heart may fail, but God is the strength of my heart and my portion forever.”

Woodrow &#8220;Woody&#8221; Wilburn, age 81, of Greeneville, passed away peacefully Monday, February 28th 2022 at his home. Woody made the decision to become a Christian early in adulthood. Because of his faith, his family can claim the promises... View Obituary & Service Information

Send flowers to the Wilburn family.